Final Edition from Matthew Roberts on Vimeo.Seriously.So the Rocky Mountain News, Denver’s daily paper recently shut down. There has been a minor media storm recently around the idea of some large, stoic newspapers hitting financial hard times. It seems like it is only a matter of time before the SF Chronicle, the NYTimes or the Chicago Tribune is holding it’s hand out for a bail out, hoping not to meet the fate of the Rocky Mountain News. A billion here, a billion there, why not save them. It’s like super-sizing for a quarter.But come on, news papers? First, lets start with model – delivering news to your door step several hours after it happens. It isn’t news by that point any longer, it’s olds. When the plane crashed in the Hudson, Twitter & Flickr were the news, not the SF Chronicle. By the next morning, when the paper came out, everything to be known about the crash was already known. It wasn’t like they were breaking some major story.Second, how many tons of paper or thrown into landfills each day. I’d love to see the study on this, but let’s say that the Chronicle prints 1 million papers a day at a pound a piece (maybe a bit more on Sunday). You can do the math, but if you extrapolate that same number through the 50 largest cities in the US alone, you get pretty close to 1 billion pounds of paper being thrown away each month. That is a lot of dead trees and a lot of waste.Journalism isn’t dead. In fact, I’d say that by looking at the Technorati numbers, that journalism is in more demand than ever. I don’t believe that print media is even close to dead. But the idea of delivering daily content, in a manner that is wasteful and dated is just plain stupid business.Businesses come and businesses go. It is the beautiful part of capitalism. Got a great idea? Is there a market demand? Know how to execute on it? You might have a successful business. But if there is no demand (daily newspapers) or you can’t execute (US automotive industry) then your business should go away. Don’t bemoan the fact, simply adjust and thrive.And yes, I will miss spending Sunday’s doing the NY Times cross word puzzle with my wife, but I suspect someone will build a social crossword puzzle that we can do together by that point. 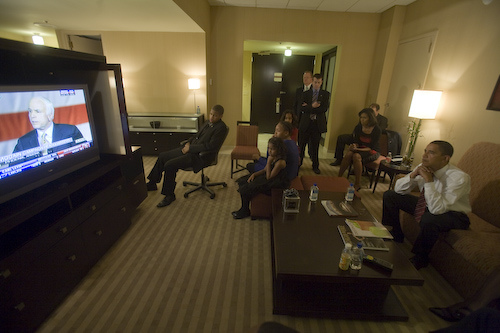 A few weeks ago, I wrote a post about how social media will make the world a better place .  The past Tuesday, I think that this point was proven to the world as a junior senator from Illinois was elected the President of the United States.Much has been written about the way that, over the past 2 years the Obama campaign, has leveraged everything from YouTube to Facebook to MySpace to Flickr to Twitter in order to convey a consistent message and increasingly gather support for his bid for President.  By the end of September, while the McCain camapaign seemed to be making a presence in these new fangled interweb thingies, the Obama campagin was moving full throttle, like Katamari Damacy , gathering up more and more supporters, $5 at a time, with a message of hope and change.In the end, Obama had out raised McCain by over 2 times.  But more importantly than the money raised was the way that Obama reached out so frequently and was so transparent and so consistent with his message.  When I look at the stats of their respective social media sites, it is clear that Obama was far ahead in having a medium that allowed him to communicate asynchronously with his supporters.

Unlike politics over the past 12,000 years, another unique component of the Obama campaign was the level of transparency and the interest in reaching out to get the opinion of his constituents never before seen.  Obama and staff sent out regular missives, sometimes to the point of being spammy, to all willing to receive them.  These messages were fairly consistent – this is where I will be, this is what we are working on, this is why, please make a donation.  After 8 years of secrecy, this is just another one of things that Obama recognized that people wanted, a level of transparency in their government.  Sounds simple doesn’t it?The past 4 days, since Obama’s election have been no less interesting in terms of the usage of social media.  The day immediately following the election, the Obama administration (that sounds great) launched Change.gov , a site maintaining that level of transparency. The site keeps all of the public up to speed with what is going on with the administration and has even asked the public for ideas and job applicants.  Of course, all of this information has been available on some hard to navigate site.  What Change.gov does is make it easy to find and easy to communicate.This past week also saw a lot of Al Gore .  He supposedly signed up for Twitter .  He was on DiggDialog and make the closing talk at the Web 2.0 Summit .  All amazing stuff.As I mentioned in my previous post, I believe that people want to do what is best for the community and do what is best for the environment.  The election of Barack Obama shows that social media can really work to make a tremendous change.  We now have the soon to be President of the US that fully embraces social media as well as the person most outspoken for climate change both building armies of people willing to listen, spread and modify their lives based on their message.It is a great time to be alive and to be part of this happening.

Dear Mom & Dad,Comparatively, I don’t live a crazy life.  I’m fairly passive and things aren’t too exciting, but I know that you love keeping up with my life.  Work, kids, house, dog, etc.Like a lot of the kids these days, I’m doing all sorts of things on the interwebs.  Blogging, taking pictures, making videos, sharing all sorts of stuff that I find interesting.  Things move pretty fast.Sadly, neither of you use IM.  I’ve tried to explain RSS on numerous occasions, but let’s face it, most people in my industry can’t explain it to their folks, so let’s skip that one.  And Twitter, I might as well try explaining things in Klingon.So what to do?My friend Alan and I were talking about creating a service that would allow you to follow just one person in Twitter.  Just to keep our parents up to speed with what we are doing.  Clever, but kind of dull, especially as your other kids start to realize that the interwebs are a series of tubes and post their own missives.But I’ve been using FriendFeed for a while.  As a parent, this should be super fantastic cool for you.  Kind of a one stop Scott shop.  Want to know what I’m up to?  Look for my Twitter feed.  Want to see pictures of the wedding I was at this past weekend (or of the kids), look at my Flickr Feed.  Want to see my latest blog post, that is fed into FriendFeed to.  That article that I mentioned from the NYTImes?  Like Prego, it’s in there. Now it’s all available in FriendFeed.So check it out.  I even took the liberty to sign you up for the service and subscribe to my feed.  Once in while check it out.  Total strangers know what I’m up to, now you can too.Love,ScottPS – yes I realize the irony of the odds of you reading this on my site.

Congratulations to my friends over at Flickr for launching embeddable slide shows. This is really very cool.Here is a slide show from when we built our house. You can read more about the process here.

One of the last projects that I was working on prior to leaving Yahoo was laying out the support guidelines for Flickr Video.

Congratulations to the entire team!!!

Here is the link to my first video.

One of the last projects that I was working on prior to leaving Yahoo was laying out the support guidelines for Flickr Video.

Congratulations to the entire team!!!

Here is the link to my first video.

Had an awesome time last night at the Flickr Turns 4 party. It was great to see some old friends and meet some new ones.Photos from the evening are here.

Had an awesome time last night at the Flickr Turns 4 party. It was great to see some old friends and meet some new ones.

Photos from the evening are here.

Heather’s recent post on the Flickr blog highlighted a service called Photojojo. Essentially, it is a time capsule for your Flickr photos. Sign up for it and it automagically sends you a couple of photos from a year ago.It is pretty sweet. Today, I got two pictures from when we were designing our house. I nice reminder.

Heather’s recent post on the Flickr blog highlighted a service called Photojojo. Essentially, it is a time capsule for your Flickr photos. Sign up for it and it automagically sends you a couple of photos from a year ago.

It is pretty sweet. Today, I got two pictures from when we were designing our house. I nice reminder.